A rainy day. I went out just long enough to do a census (and band 1 RBGR and retrap 1 GRCA banded last Fall). Lots of local breeding birds around but not many migrants – especially warblers. John Miles and I have exchanged a couple of e-mails to the effect that despite reports of lots of warblers being seen to the north (e.g., Thickson Woods north of Toronto) we have seen very few. Our thinking is that the birds are just “flying over” – getting north as fast as they can. On the other hand, I have yet to hear/see an Eastern Wood Peewee at Ruthven so far – they should have been here by now.

Red Chestnut on a rainy day. 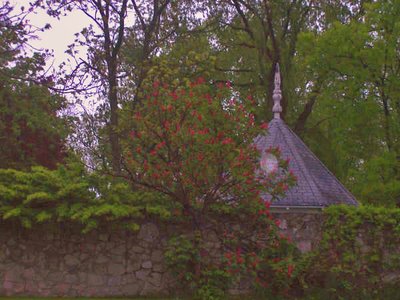 Rick, feeling rather blue on this rainy, warbler-less day, decided to also paint an image of the Red Chestnut hoping it would cheer him up (or maybe he was just expressing his ‘feelings’ in some way). 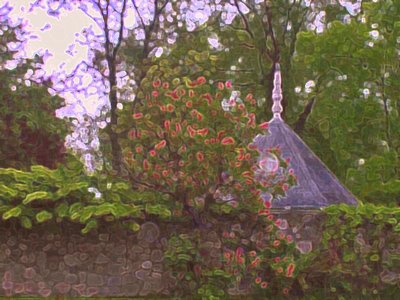 Beauty and the Beast? Noooo….I’m sure that to someone Brian is beautiful. (I just haven’t found that person yet.) On his left is Liz Sukkau a recent McMaster graduate and our new Summer student. Liz has a minor in GIS but seems to have lost her way looking for a job in the city. Despite being a Mac graduate, she’s pretty knowledgeable and keen to get going. 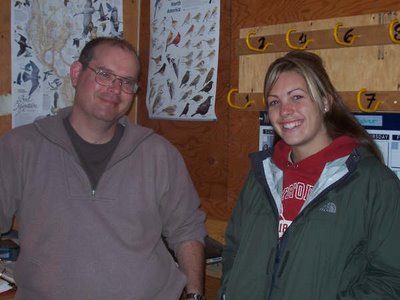 Raining prety good this morning so I got caught up on some ZZZ’s. Radar indicated the storm had past so I went out late around10:30m to sample the banding area. Ran into a light drain/drizzle on Reg. 3 east of the Cheapside Rd. Had the station operational by noon with some spotty light rain persisting. Should have stayed home, there had not been a fall out as sometimes occurs. However I did get a sample which was not too much. From the reports received there are good numbers of warblers at Rondreau and Oshawa but not in our neck of the woods.