A Spring dawn has to be the best time to come out to a banding station – vibrant colours and intriguing shapes being highlighted by the ever rising sun: the calls of new migrants that have come in during the night; and the anticipation of what the day will bring. It can be a very rewarding time.

Today was no exception. The pre-dawn net opening was accompanied by the sounds of American Woodcock, Great Horned Owl, and Wild Turkey, and the ethereal calls of the first Wood Thrush of the season. The rising sun fell square on an amazing male Orchard Oriole perched in the trees over the mansion, an Eastern Towhee on the adjacent branch. A spectacular display on an early morn.

Good thing too because after the first net round the birds disappeared and things were fairly wretched for the rest of the day. And this even after some kind visitors brought chocolate (good chocolate!!) to the banding station.

A lot of things must have moved out during the night. There were 57 species on Estimated Totals yesterday and only 47 today. No flight of Common Loons either.

However not all was doom and gloom. Beside the first Wood Thrush and Orchard Oriole, a number of resident Yellow Warblers have come back to Ruthven and an American Robin was observed carrying food presumably to its nest. A banded Least Flycatcher was also a season’s first.

Today was the start of the Ruthven butterfly inventory and a volunteer appreciation event was held in the Coach House.

Some of the retrapped White Throated Sparrows have shown dramatic increases in weight. One banded on May 1st weighed 28.0g, today it was 30.7g. Another banded May 2nd weighing 26.0g weighed 28.9g today. A final example was the 29.9g WTSP banded April 30th that weighed 33.8g on May 3rd. 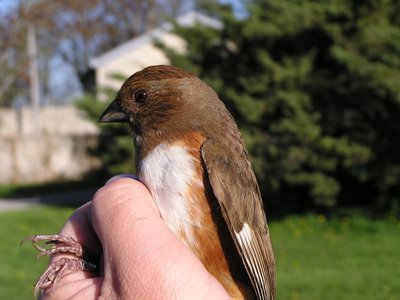 After 4 excellent days when almost 500 birds were banded, there just were not the numbers of birds around today. However, we still managed to have a pretty decent day.

The White-throated Sparrow total has now reached 310 which is a new Selkirk spring high banding count.