There was rain when dawn broke but it quickly dissipated and the opening of the nets was only partially delayed. The temperature remained unseasonably cold however.

Orchard Oriole, Baltimore Oriole, Eastern White-Crowned Sparrow, and Rose-Breasted Grosbeak were much in evidence around the banding station during the early portion of the day. In the latter portions participants in the volunteer clean-up at Ruthven Park were likewise evident clustered around the barbeque and picnic tables.

Members of the Saturday morning birding hike were rewarded by observing 42 species, including the season’s first Ovenbird.

Male Rose-Breasted Grosbeak captured coming to the feeders near the banding station. Ornithologists have long surmised that the black and white pattern of the RBGR is a protective colouration that acts as a defence against predators. When in flight the contrast between the light and dark colours makes it very difficult for predators to correctly judge the exact distance the RBGR is away from them, consequently making the grosbeak harder to capture. 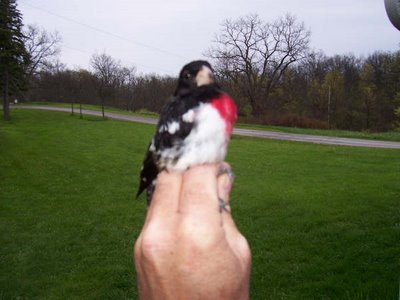 Today was the rain date for the Spring Clean-up day that was aborted two weeks ago. Board president, Gail Collins, visited the lab to explain why she would not be able to do anything to help….again. 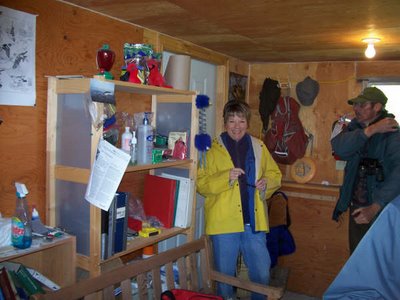 New volunteer, Daphne Payne, learning how to scribe. Everyone works – there are no “free rides” at Ruthven Park! 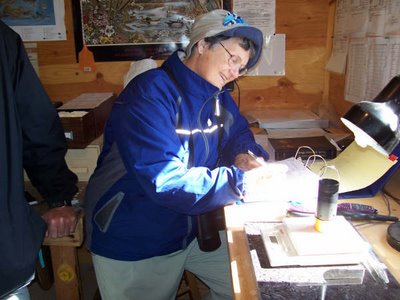 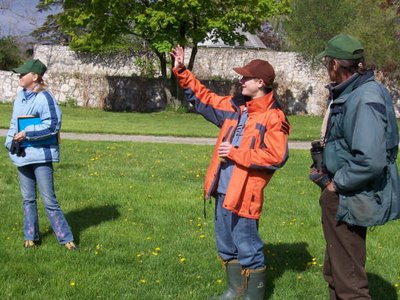 Jim Biggar checking a bird for ticks. This is part of a study out of the University of Montreal in which researchers are looking at avian-borne ticks as a disease vector. If ticks are found on a bird, they are removed, bottled, and sent to the researchers for identification and examination for diseases. 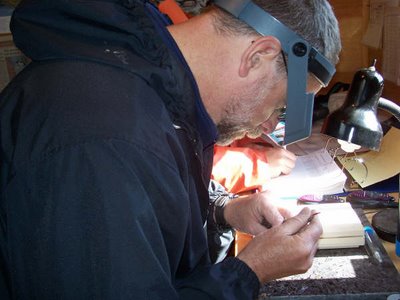 I delayed leaving for the park until the rain was over. Very little around this morning. As has being the senario, a small flight of birds moved through around noon. The net result was that almost as many birds were extracted while closing as had been done all morning.