Another cold morning at Ruthven with the thermometer registering -6C at just after 0400am Standard Time. There is always some trepidation on mornings like this since one never knows what species were driven out by the descending temperatures and what (if anything) came in their place. In addition, it isn’t a lot of fun attempting to unfurl frost covered mist nets and getting them open on frost-slicked poles….

The local Tree Swallows were remarkably vocal pre-dawn, joining the never-sleeping Robins in a duet before the symphony of the dawn chorus.

The day was fairly quiet at the nets, although Peter Thoem ran into a wave of Myrtle (Yellow-rumped) Warblers near the cemetery. He also managed to find a pair of Blue Gray Gnatcatcher building a nest out of spider webs and moss.

A pair of banded Song Sparrows were found in courtship. It was speculated that they must have met in the banding station while waiting to be processed. We’re not a migration monitoring station, we’re a dating service for sparrows.

Jim Biggar found a couple of ASY male Orchard Orioles caught in one of the nets. Likely they were squabbling and blundered in. One was a recapture that I happened to have photographed last year. (last years pic attached).

As the banding day drew to a quiet close we were treated to a display of acrobatics by a pair of displaying Red-tailed Hawks. They would rise high in the air while circling each other, and one would tuck in its wings and dive rapidly towards the ground with feet outstretched. He would then swoop up over the river, climbing to repeat the procedure. Truly a breathtaking sight in the clear blue sky. 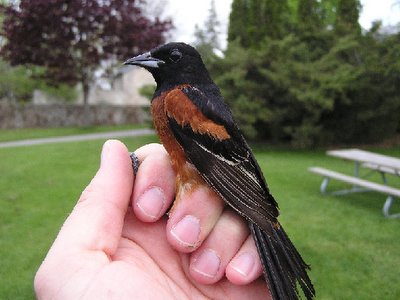 A fairly quiet day at Selkirk. The station was visited by 17 members of the
Stratford Field Naturlists. A few birds filtering through but no numbers or
anything special.

Selkirk’s top 10 so far this spring