A day of many remarkable sightings at the Ruthven Banding Station. A Sandhill Crane was observed flying over the property and a skein of 71 Whimbrel zipped over heading upriver. The most amazing sighting however was that of Rick, who through sheer dedication (possibly influenced by gale force winds and snow) cut short his holidays to assist the resident lackeys in their monitoring endeavours.

His selfless actions were rewarded amply by the presence of the first Cape May Warbler, Wilson’s Warbler, Yellow-bellied Flycatcher, Cliff Swallow, and Whimbrel of the season. Even the mossies broke their torpor long enough to give him a rousing welcome.

A lot more birds around today as evidenced by the number of new migrant species encountered, although the action tapered off by midmorning.

The number of swallows along the river continued to increase with even more Bank Swallows, Tree Swallows, and Barn Swallows being recorded than yesterday, along with a couple Cliff Swallows and 5 Purple Martins. 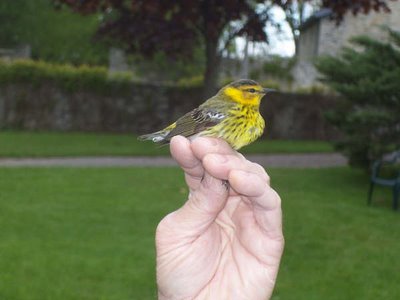 Brian with proud parents…thank gawd he finally got a job! 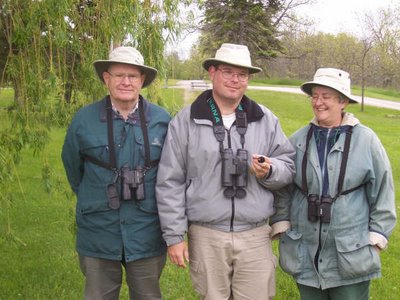 Another slow day for this time of the year at Selkirk. A few new arrivals back on
teritory were noted with singing EAWP and WIFL. The Whimbrel are coming through in number with 2 flocks seen on census at the tip totaling aprox. 100 birds.

No sign of the waves of warblers and thrushes being reported elsewhere.