Overview. Selkirk operated 26 days during October. 1676 birds were banded which is an average of just under 65 birds per day. This keep the crews busy. The fall to date total as at October 31 was 3432 which is the 3rd best fall at Selkirk durning the 9 years the station has operated in the fall.

PS. November has started off well with a great day for November 1st. I forgot to write down the day’s totals but 77 birds of 12 species were banded. Full listing tomorrow. Best bird may have been a Blue-headed Vireo (BHVI).

For Linda’s information Tundra Swans are back and some were dropping down into the estuary or out onto the lake.

What a lovely day to start November! It was a more pleasant day than much of October. No wind to start, with some welcomed sunny breaks. There were more birds around than I had anticipated. Quite a few retraps. Most of these birds were banded very recently.
We are still banding Hermit thrushes, with 4 more today! (This is a Ruthven record, with well over 100 banded.)

Gusty winds and light intermittent showers kept the few birds that were around hunkered down. It was very quiet with little visible migration. Fortunately, to keep the day lively, we had an influx of women: members of the Burlington chapter of CFUW – Canadian Federation of University Women. They were a keen and interested (and interesting) group that kept us on our toes. And they’re going to come back to help us brush out a new walking trail.

Ruthven Park’s banding station was visited by members of the Burlington Chapter of the Canadian Federation of University Women. Bander Rick Ludkin was able to give them a good introductory exposure to bird studies at the site. Rick reported: “Although I’m just a guy and not that bright, I found that sudden concentrated looks to the treetops or the cocking of my head to nebulous sounds in the underbrush, followed by busy scribbling in my notebook, was all it took to have them thinking I knew what was going on…..” 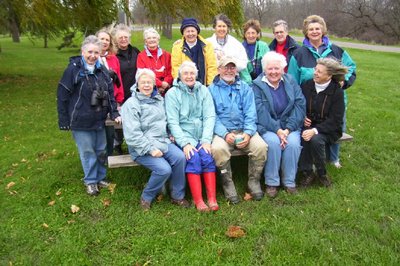 A mild morning with the threat of light rain. Most of the morning was sunny breaks but a distance rumble of thunder could be heard now and then. A light rain started just about normal close down time so we got in a full day. The wind was a little brisk but the pines were again an effective wind block. Not as many birds banded today as compared to the past couple of days but still a decent day. Starting any day now 10 or so birds banded will be a good days catch.

A nice big am. toad was beside the muddy banding trail today. So far this October over 5.25″ of rain has fallen to go with the down pours of September which brings the 2 month combined total to over 10 inches of rain. This is a lot for this part of the country and on the heavy clays the surface stays saturated.

A beautiful Fall day. Lots of bird movement – in terms of Canada Geese and blackbirds. An American Woodcock flew over net #2 while I was opening. Later, a Common Snipe passed overhead toward the flats on the other side of the river. There were quite a few birds around for this time of year although not much variety (35 species encountered).

When it is a nice day at Selkirk the usual pattern is for very few birds to be in the banding area. Fortunately that was not the case today. A pleasant fairly mild sunny day and no gale blowing!!!!! Maybe some of the mud may dry a bit. September and October have seen around 10″ of rain fall. Everything is saturated. I can not recall so much slop (mud) around the banding area and this is with 100’s of feet of drainage ditches dug and over 400 feet of wooden cat walks laid down over the cronic worst sections.

With the mild weather a garter snake, little brown snakes and even a wood frog were noted in the banding area.

The combined kinglet total is now over 1000 banded this fall.