In a rare occurrence Rick, Loretta and myself were actually present at the Ruthven Banding Station at the same time.

Such an auspicious gathering should have under normal circumstances been rewarded by a plethora of rare and exotic migrants, the recovery of birds banded far away and long ago, and the discovery of interesting behaviours undocumented by science. So at least one would think…

Despite the diligent application of herbicidal behaviour and the promise of clean bird bags the heavens did not open deluging us with rare and exotic migrants, recovered birds, while plentiful, were both disappointingly recent and local, and all observed behaviours were of the mundane variety….at least until Rick and Loretta left.

Late in the morning a pair of Red-tailed Hawk intercepted a passing Red-shouldered Hawk and harassed him – somewhat unsuccessfully as it turns out since the Red-shouldered Hawk seemed to be giving better than it received. A few minutes later a passing full adult Bald Eagle was likewise intercepted, but did not deign to pay the Red-tailed Hawks much attention. The infuriated Red-tailed hawk duo then salved their pique by picking on an innocent passing Turkey Vulture. All in all an amazing aerial display. 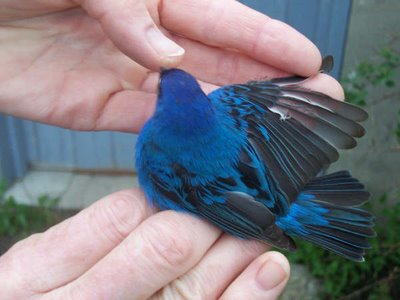 Only the odd warbler call at dawn with 1 WTSP call thrown in. Fist round produced 4 birds which was not a good indication of a decent day. Birds filtered into the area as the day progressed so we ended up with a fairly decent day which was a surprise considered how the day started.